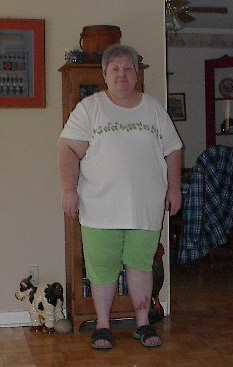 I was not an overweight child until I reached puberty. When I started putting on weight, I started getting teased by my brothers and sisters. My nickname was "Ellie the Elephant".

I tried one diet after another during my high school years and was prescribed "uppers" several times. I weighed 172 lbs when I got married and managed to lose 30 lbs through Weight Watchers in that first year.

It all went crazy after that. We tried to start a family and found out that neither of us was fertile enough. That was a blow to me since I came from a large family and had planned on one for myself. Food was my comfort and since both of us love to eat the same things, I had a partner in crime.

Flash forward 33 years and I found myself weighing 284 lbs. With a 5'1" frame, you can just imagine how hard it was to move or feel good about myself. I had high blood pressure, type 2 diabetes, cholesterol issues, and sleep apnea. I did not want to face the rest of my life as a prisoner in my own body or to spend the rest of my life on prescription medicines for weight related illnesses.

I was researching the lap-band procedure when I happened to watch the Gil Gerard show on Discovery Health. Wow! What a miracle! I took down the information and immediately researched the surgery on the internet. The more I read, the more I believed this was what I was looking for. The short down time, located near my home, the convenience of support and the ease of maintenance were all important factors in my decision.

I read and reread the manual several times. (I marked it in several places and refer back to it often.) I started work on my packet in February and had mini-gastric bypass surgery on April 20th, 2007 with Dr. Peraglie in Davenport, FL at Heart of Florida Hospital.

I don't remember anything after they gave me the "happy juice" until I woke up in the recovery room two hours later. My surgery took 53 minutes and I was bypassed 7 feet.

I walked most of that night to be sure I had worked out any gas hiding in my system. I had some blood build up behind one port. The first time I bent over, it blew out and scared the nurse. It was no big deal but left a sizeable bruise on my belly.

I was pretty tired the first few weeks until I got on solid food and was into a regular routine with vitamins and such. I eat about 5-6 times a day and drink all day. I am not back on any of my prior meds although I check my blood pressure and blood sugar.

I have been gardening this summer in the Florida heat! I never would have spent more than 10 minutes bent over before because my face would be beet red from the exertion. Now I can spend long periods working outside as long as I have Gatorade with me.

P.S. Sure wish I could post an after picture.

Elinor blogs at Elinor Reynolds MGB Journey and you can see an "after" photo there!