From cereal to oatmeal (and never looking back) 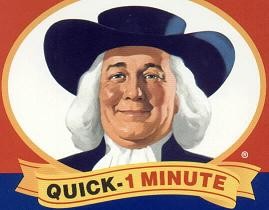 I'm a lifelong cereal addict. When I was growing up, cereal was considered healthy.

Healthy? It seems to me that if you have to re-spell "Fruit," presumably so you don't get sued by real fruit for impersonation, health is not what's going on when you eat this stuff.

Then I grew up and left behind cereals with Sugar in their title, but I didn't leave cereal behind. I kept eating it. Cereal, I believed, was what people ate for breakfast...unless you could get your mom to cook for you. And my mom was a few thousand miles away.

Then I started paying a little more attention to this notion of "health." (I'm afraid this happened rather recently.)

I started paying a little more attention to this notion of "price" too. Cereal had started to go for about the same price as sirloin.

I started looking at nutrition labels. And you know what? Even though sugar wasn't appearing in the name of the cereal, it sure as heck was appearing in the ingredient list. Very close to the top! No wonder this stuff tasted so good!

I started looking into "healthier" cereals. Some of them didn't even have sugar on their ingredient lists. But they did have stuff like "evaporated cane juice." And they tasted sweet. Hmmm...

Do you think evaporated cane juice might be sugar? The numbers on the nutrition label certainly suggested that was the case.

I decided processed cereal should probably start going on my own endangered species list. But what to replace it with?

One day, at the grocery store, I bought some oatmeal instead of the usual cereals. Red, white and blue canister. That guy with the funny outfit.

I brought it home. I cooked it up. Something was definitely missing.

You know what that something was, don't you? It was sugar.

Well, I bought this stuff to get away from the sugar. I started trying additives.


Of course, what did these things have in common? Sugar, not in a white, powdered form, but just as concentrated. Similarly glycemic.

Mmm. I sliced bananas every morning to put on top and mask the lack of flavor.

Then it happened. One morning, my last banana had gone soft and mushy.

I hate gross bananas. The texture makes me want to throw...

But then, I had a brainstorm.

Hmm. I wondered if maybe I mushed my mushy bananas into my mushy oatmeal, would it be possible I'd like it??? After all, mushy bananas are the best ones to cook with, the sweetest, the ones that taste best in banana cream pie...

The rest is history. I pretty much eat banana oatmeal every morning of my life now...and I never get tired of it. Sometimes I add raisins (they look like chocolate chips), sometimes I add ginger (weird, I know, but try it!), sometimes I add dried cranberries. Always I love it.

That's the other thing about oatmeal. What kind of magic did nature work to give it this wonderfully fatty texture...and it actually lowers your cholesterol.

Unreal. And because it's not processed, because it just basically falls off the oat tree (or whatever the heck it grows on) and lands in the weird looking guy's canister, it's cheap. Cost-wise, it's a fraction of the cost of processed cereal. (Even less if you buy from the bulk section.)

Sure, you don't get the great cartoon characters, or the hidden toys, or the sports stars, and you have to spend a couple minutes actually making it, but it tastes better, it feels healthier...and you stop worrying about your bananas going bad!